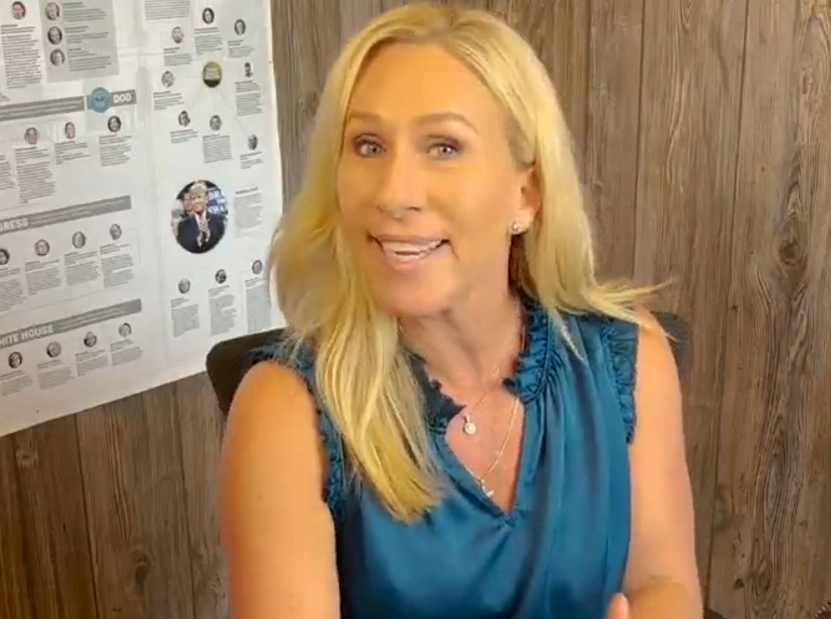 Anti-LGBTQ+ Rep. Marjorie Taylor Greene (R-GA) has declared that members of Antifa are the real fascists and should be charged with domestic terrorism in part because they support drag queens.

“They are not the anti-fascists,” Greene said during an interview with Tucker Carlson. “They are the fascists and they always show up and they defend Democrat causes. Not only do they attack police but they defend the drag queens targeting our children with drag queen story time.”

She also threw in that she apparently doesn’t believe there is a pandemic at all.

Greene also said she would introduce a bill to designate anyone associated with Antifa as a domestic terrorist.

Antifa is a left-wing anti-fascist movement that does not have a centralized organizational structure. There are no defined leaders and there is no official membership.

Antifa members see themselves as defenders of racial equality and LGBTQ+ rights and do believe using violence is justified. But a 2020 explainer from the New York Times warned that the right has perpetuated a false equivalency between Antifa and right-wing extremists, who are more likely to utilize violence.

Armed Antifa members have shown up to counterprotest anti-LGBTQ+ extremists outside drag shows, as well as other LGBTQ+ events.

The GOP has continued to demonize drag queens, claiming they are “pedophiles” who are “grooming” children. A slate of bills have been proposed by Republicans in several state legislatures attempting to ban minors from seeing drag shows and/or ban drag shows in public places.

Twitter users roasted Greene for her interview with Carlson, during which she also accused Democratic lawmakers of being in cahoots with Antifa members and blamed a recent riot in Atlanta on Antifa, though according to Newsweek, there is no proof Antifa members were involved.

Seven more shot dead in USA and Greene is still carrying on with false propandistic twaddle.

Who is Antifa? You understand that Antifa is not a structured group but an ideology that opposes fascism, racism, and extremism.

It’s not like your Proud Boys or Steve Bannon, who have leaders and are backed by dark money.

Clinton was right about Trumphttps://t.co/SANq2xt77k

Maybe it should come from someone who isn’t themselves a domestic terrorist.

Could you please inform us where you found them, their headquarters! I’ve been waiting for my tee shirt and badge. I want to attend meetings but I never get the newsletter.
SMH

Are you sure you’ll have enough time to introduce legislation regarding antifa, after all you spend all of your time with speaker McCarthy grooming him to do your bidding, so what are you going to have time. You are a very pathetic politician feeding on hate and fear, pitiful

I’ll let the rest of the members know at the next meeting.

I think it will also be our annual gala ball.

Oh Honey, be sure to include the address for the HQ (I’m sure it’s on the letterhead the org. leaders have surely sent you) & don’t forget to ask all those WWII “Antifa” veterans for their medals back. You know – like the guys who stormed the beach at Normandy to FIGHT FACISM!

And just how are you going to do that when ANTIFA is a concept, not an actual organization. An amorphous constantly changing minute segment of the American population that has no defined membership?
Are you going to call in your KGB and start searching homes, spying on everyone?

As Peru descends into chaos, queer people have a bigger priority than LGBTQ+ rights

Teachers are being told to dismantle their classroom libraries